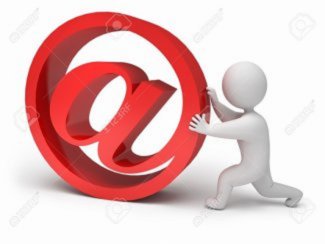 SECTION 1. THE HISTORY OF THE FUND – MAKER

Polonne’s Distrust Court is situated in the Polonne town which is in Khmelnytskyi region. Polonne is one of the oldest towns in Podillya. It had a lot of names, such as Polony, Polonyi, Polonnaya, Polonne Big, Polonne New.

Polonne district appeared in 1923, but as a modern administrative and territorial unit of the Khmelnytskyi region it was formed in December, 1966.

According to the guidebook of the statearchive of the Khmelnytskyi region, courts were created on the basis of the decree of the Soviet of Public Commissars of Ukraine (January 19, 1919) «About Courts». Public courts were decided into sections, according to the Regulation «About the Judiciary of the Ukrainian SSR», which was approved by All-Ukrainian Central Executive Commitee in October 23, 1925. The courts were subordinated to the Department of the Public Commissariat of Kamyanets-Podilskyi region.

During the World War 2 the courts stopped their work. They started to work again after releasing from German invaders. Unfortunately there is no information about the history of our court for the period from 1919 to 1944.

According to the information that is found in the archival document as, as well as interviews with former court employees  and other citizens who know the history of the district well, it is clarified that in the period from 1944 to 1954 there were two provincial national courts in Polonne:

The Department of the Public Commissariat of Kamyanets-Podilskyi region was renamed to The Ministry of Justice of Kamyanets-Podilskyi region. It continued to oversee. Later the region was renamed  to Khmelnytskyi. Therefore, the management of public courts, notary office and the region’s advocacy was carried out by the Office of the Ministry of Justice at the Executive Committee of the Khmelnytskyi Regional Council of Workers’ Deputies.

There is a saved information  about wages from 1953 to 1955. According to this information the court continued to be devided into two sections. Judge Olena Pavlivna Halchenko became the head of the Court of the 1st district. Under the presiding in this court also worked such people as H. Barak ( court executor), S. Ukraine’s, H. Singer ( secretaries of the court), F. Shkvarun ( horseman) and S. Gospodynchyk ( cleaner). M. Mahit continued to be the head of the court of the wind district. Under the presiding worked such people as I. Rasputin ( court executor), M. Gerasymchuk, T. Shmylova ( secretaries of the court), N. Bohomol ( hourseman) and Y. Yuhymenko ( cleaner).

A merger of the district of courts in one took place in 1955. And it was created the District Public Court of Polonne on the basis of the court of the 2nd district. Olena Pavlivna Halchenko was elected as a head of the District Public Court of Polonne. According to the information about wages with her also worked H. Bazak ( court executor), Z. Kovalenko, T. Shmylova ( secretaries of the court), F. Shkvarun ( horseman) and N. Protsenko ( cleaner ). The building of the court was located in Polonne, on the Kirova street.

Because of the liquidation of the Ministry of Justice of the USSR and the termination of activity of Department of Justice at the executive committee of Khmelnytskyi  Council of Workers’ Deputies in October, 1956 all its administrative functions with regards to the courts were transferred to the Khmelnytskyi Regional Court and latter, in 1970, again to the Department of Justice of the executive committee of Khmelnytskyi Regional Council in accordance with the Decree of the President of the Supreme Council of the Ukrainian SSR dated October 6, 1970.

The further history of the court is on the shelves of our court archive. The mixture of ink of different colours and yellow paper begin to remind verdicts and judgements only after careful study. They are carefully stitched and sorted. All there are row shadows of the past years that had survivedand became an integral part of the history of the District Courtof Polonne.

Myhailo Volodymyrovych Kaplun was the head of the District Court of Polonne for several decades  ( according to the book of orders in 1966). Under his chairmanship the number of court stuff were 8 ( January  1, 1967). They were: 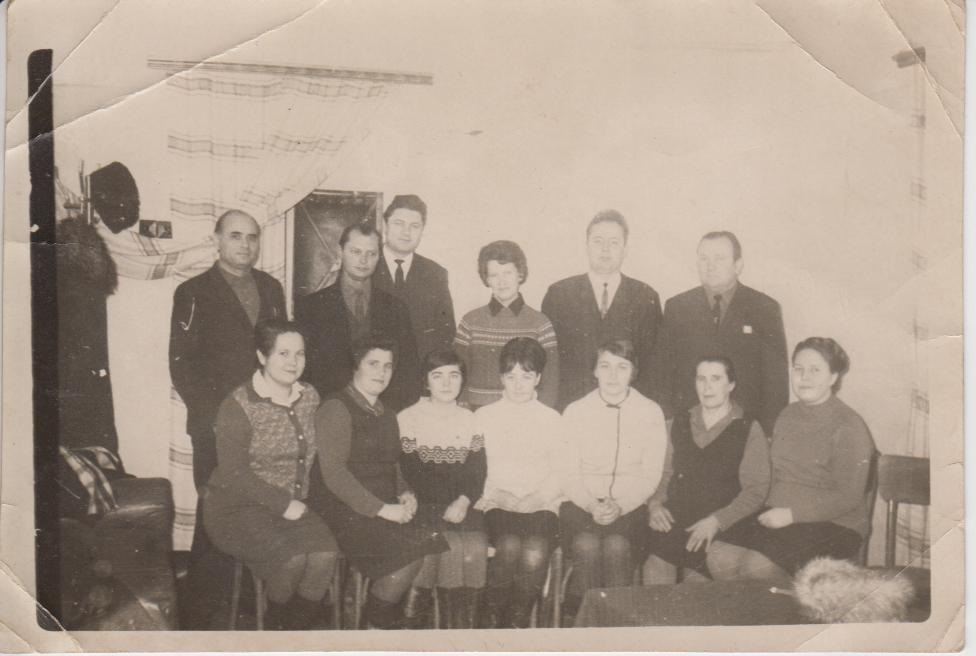 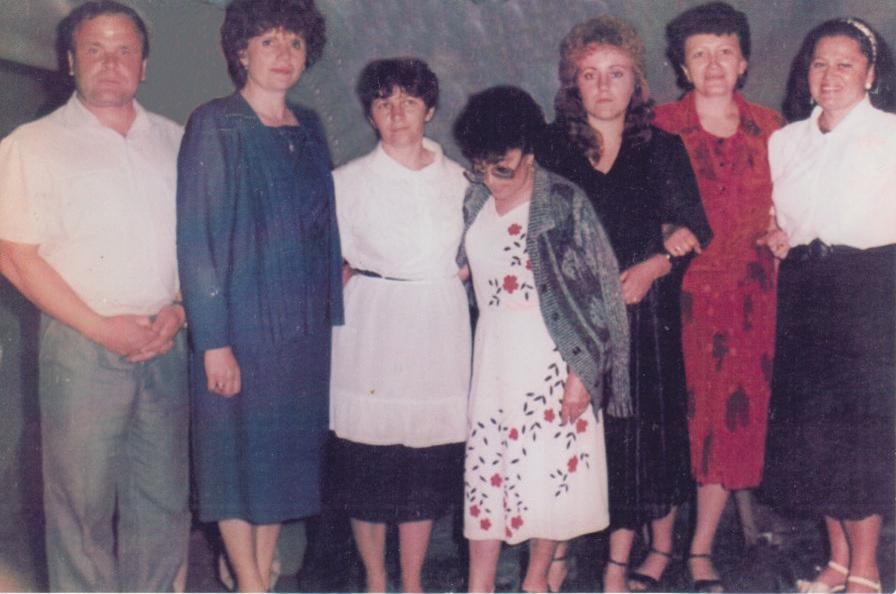 Public District Court of Polonne , in connection with the change of legislation, in 1992 changed the name to the  District Court of Polonne , and continues to be called until this time. By 1999, all procedural documents: judgments, verdicts, orders, rulings, records  of court sessions were prepared by judges and secretary of court sessions by hand from a ballpoint pen. All proceedings were conducted in Russian. Until 2002, the organizational leadership of the courts, within the limits and in the manner prescribed by law, was carried out by the Ministry of Justice of Ukraine, later, since 2003, by the State Judicial Administration of Ukraine. 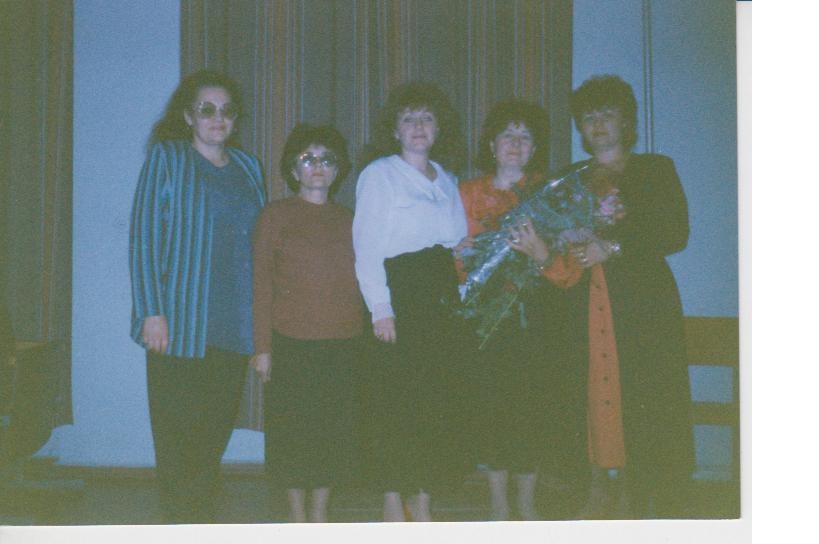 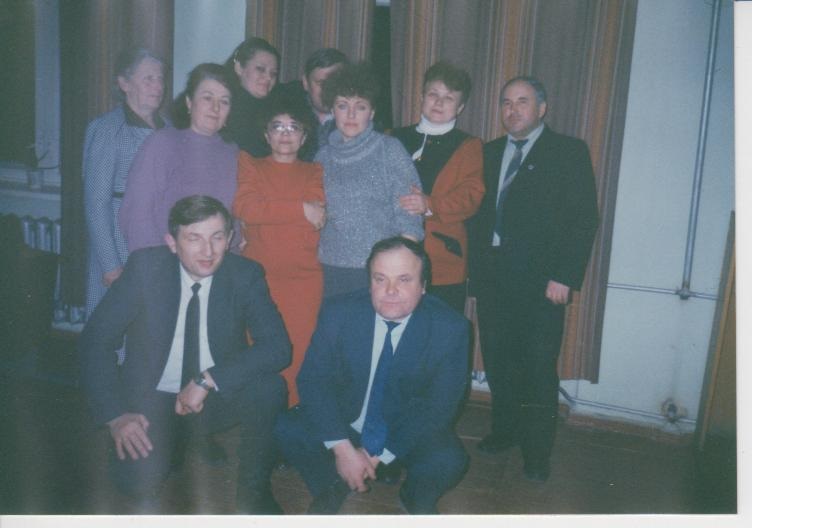 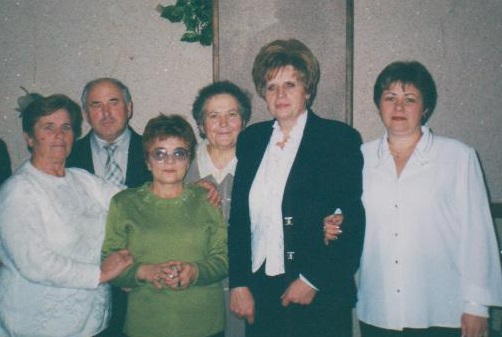 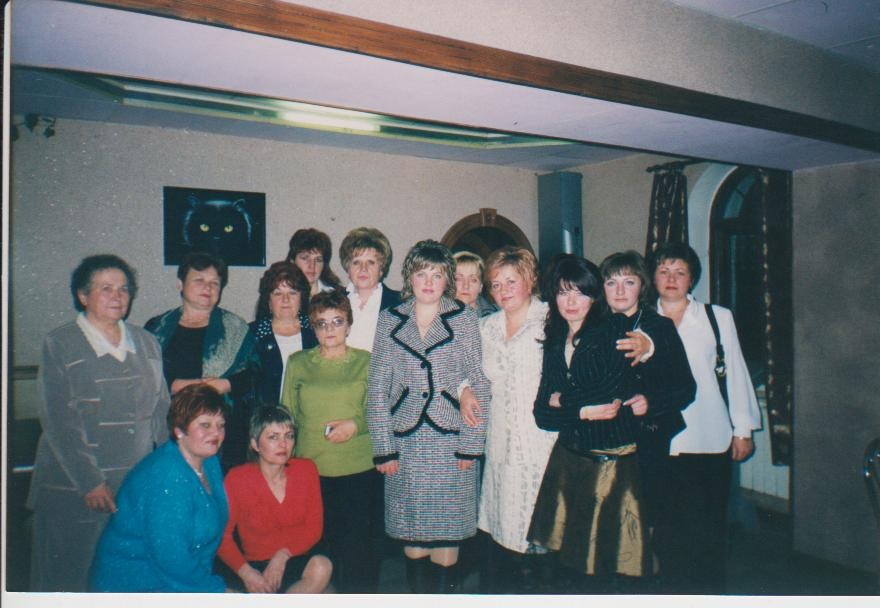 Photo 6. The employees of District Court of Polonne during the selebration of professional holiday  together with former employees.

It is necessary to pay attention to all the judges who headed and worked at different times in Polonne’s district court. These are the workers who gave most of their lives to the ministry of Phemida, namely:

Nadiya Pylypivna Kaplun – was born in October 21, 1951, in 1992 graduated from Kharkiv Law Academy named after Yaroslav the Wise,  worked as a judge of the Polonne’s District Court from 1993 to 2003;

Anatoly Grygorovych Gorshchar – was born in September 08, 1961, graduated from Kharkiv Law Institute named after F.E. Dzerzhinsky in 1987, worked as a trainee, a lawyer of the Khmelnytskyi Regional Bar Association since 1988, in connection with the liquidation of the Bar Association in 1993, he began working as a loyer individually in Polonne, a judge of the Slavuta City Court from 2000, a judge of the District Court of Polonne from 2005, the court chairman from 2014 to present;

Nadiya Anatoliivna Gurgulko – was born in January 31, 1978, graduated in 2001 from Chernivtsi National University named after Y. Fedkovych, worked as an assistant judge of the Khmelnytskyi City Court from 2002 to 2004; in 2005-2006 she was a student of the Yaroslav Mudry National Law Academy of Ukraine, worked as secretary of the Theophilop District Court of Khmelnytskyi Region in 2006, and works as a judge of the District court of Polonne from 2010 to present; 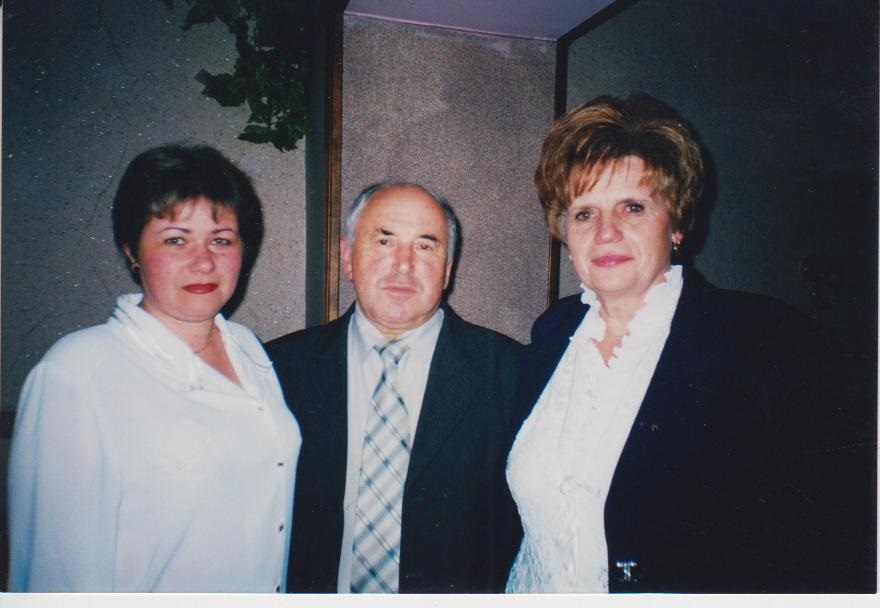 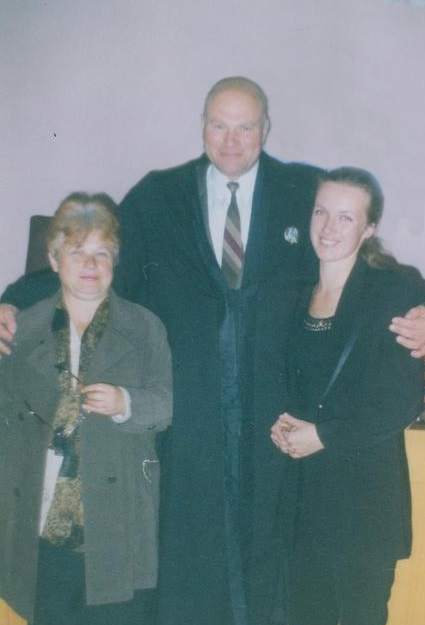 Since January 2011, in accordance with the Law "On the Judiciary and the Status of Judges",  District Court of Polonne of the Khmelnytskyi region has transferred to the registration of cases, applications, documents in court and automated division of cases by means of the automated system of document circulation of the court. For today Polonne district court considers civil, criminal, administrative cases and cases of administrative offenses in the first instance.

As of 01.10.2016, the number of employees of the Polonne district court of the Khmelnytskyi region is 22, of which:

The head of the court is 1

The head of the court apparatus is 1

The  deputy head of the court apparatus is 1

Assistants of Judge are 4

Senior secretary of the court is 1

Secretaries of the court sessions are 4

Secretaries of the Court are 4

The current authoritative and highly professional judiciary of the Polonne District Court makes considerable efforts to strengthen the democratic principles of the judiciary, provides for impartial, fair decisions. 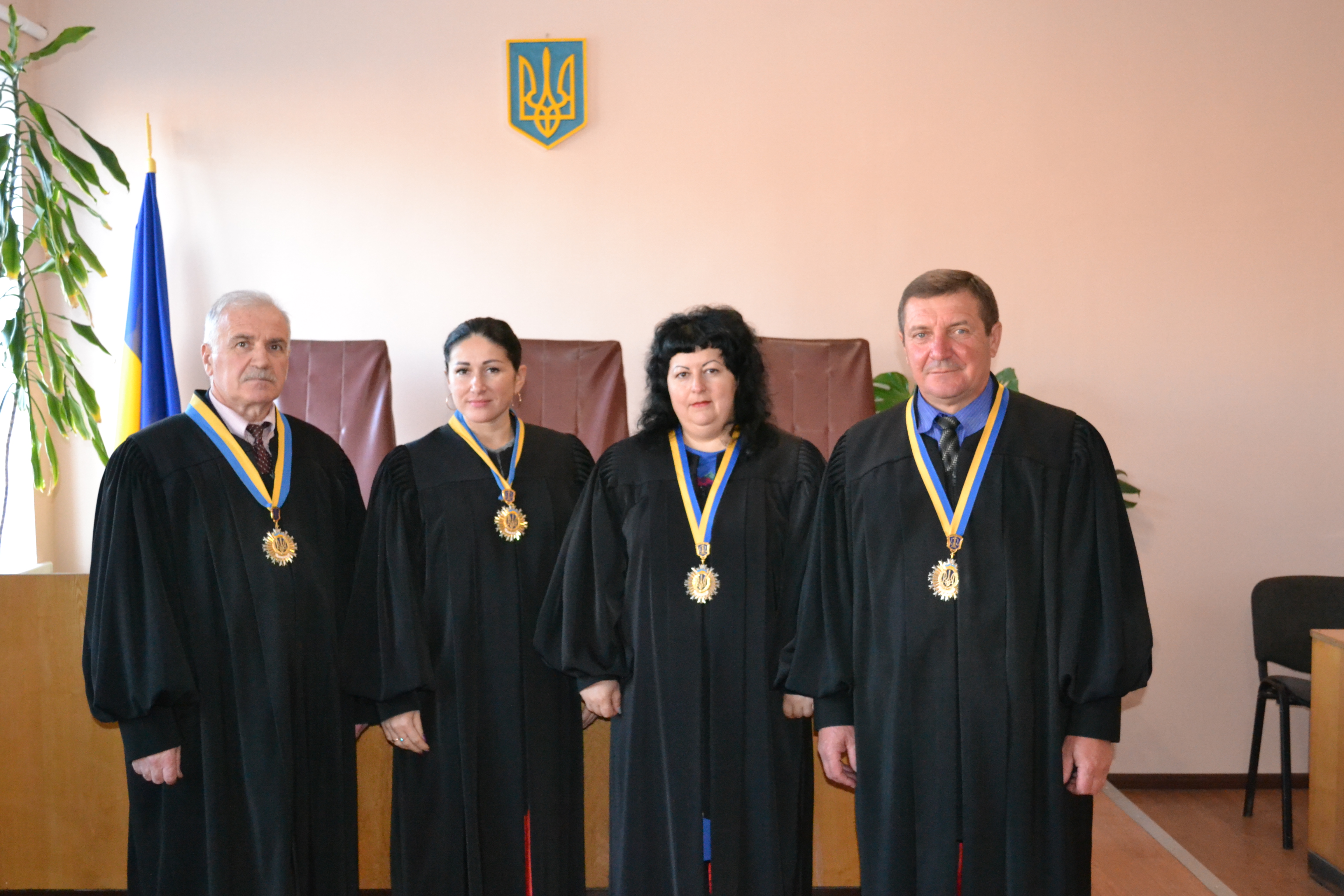 Photo 9. Judges of the District court of Polonne ( fron left to right): Bohdan Vasylyovych Bobyak ( in the past the head of the court  from 2009 to 2024 years), Mariia Bohdanivna Didek, Nadiia Anatoliivna Gorgulko and present head of the Polonne district court Anatoliy Grygorovych Gorshchar ( from 2014 until present).

Of the present employees, the greatest length of service in court have these people:

Iryna Ivanivna Syrota works since 2001  as the secretary of a court session, assistant to a judge  for more than 15 years;

Lesya Volodymyrivna Chaika works since 2002 as the consultant of the court, the assistant to the judge for more than 14 years;

Svitlana Anatoliivna Ishchuk works since 2004 as the secretary of a court session, assistant to a judge for more than 12 years;

Natalia Olegivna Prus works since 2005 as the secretary-typist, the secretary of the court for more than 10 years;

Lyubov Andriivna Oliinyk works since 2005, the secretary of a court session for more than 10 years;

Tamara Valentynivna works since 2005, the cleaner for more than 10 years;

Andrii Ivanovych Kondratyuk works since 2008 as the IT specialist, chief specialist for more than 8 years;

Svitlana Volodymyrivna Grom works since 2008, the secretary of the court session for more than 8 years;

Tetiana Mykolaivna Salyuk works since 2008, the secretary of the court session for more than 8 years.

These employees constitute the "golden fund" of the court, not only for the duration of the trial, but also for its professionalism, innovative approach to the case, attentive attitude to people. 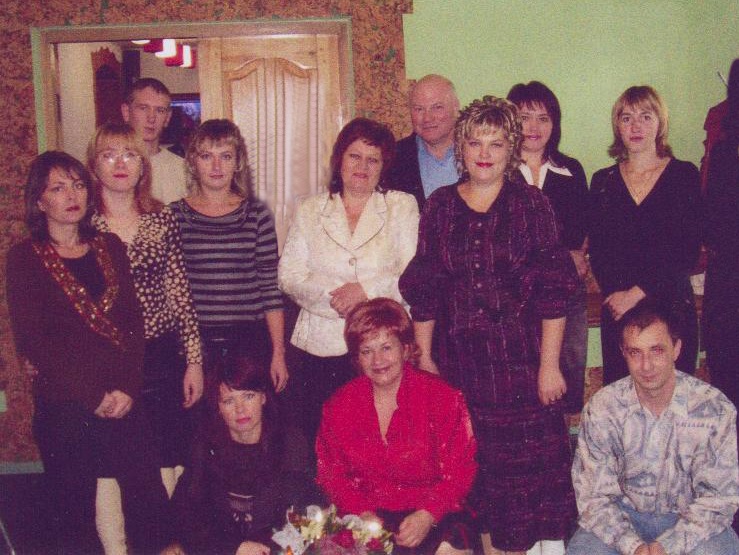 Photo 10. The employees of District Court of Polonne, 2008 year.

Many good words can be said about the employees of the apparatus of the Polonne district court,  who have recently joined the group, namely:

Olga Viktorivna Poveda works as the secretary of the court since 2012 (currently on a childcare leave of up to 3 years old);

Marina Vasylivna Zagoruiko  works as the court orderer from 2013 (she is currently on a childcare leave of up to 3 years old);

Marianna Yuriivna Litvinenko works as the secretary ofromf the court 2014;

Olga Oleksiivna Bogdanevych works as the secretary of the court session from 2014 (currently on leave to care for a child under 3 years of age);

Yuliya Oleksandrivna Gorbach works as the assistant judge from 2014;

Alina Andriivna Kalinka works as the secretary of the court session from 2015;

Lyudmyla Olexandrivna Zakruzhetska works as the secretary of the court session from 2015 (currently on a childcare leave of up to 3 years old);

Dmytro Olexandrovych Budnyk works as the secretary of the court session from 2015;

Inna Yuriivna Bondarchuk works as the secretary of the court since 2016.

The young generation takes an example from the elder and goes to the heights of personal and professional development, introduces to the team a novelty, creativity and a bright look.

In the corridors of the court there are information stands on which information is useful for citizens: schedules of citizens' admission to the leadership of the TU SSA of Ukraine in Khmelnytskyi region, the Court of Appeal in the Khmelnytskyi region, the rules of the internal labor code of the court, the Rules of the court, the lists of cases for trial , exsamples of applications for the issuance of copies of judicial documents, the granting of permission to visit with persons held in custody, extracts from regulatory legal acts regarding the size of the rates of relevant payments, information the provision of free secondary legal aid.

At present District Court of Polonne of Khmelnytskyi region is located on the Heroes of Maidan street, 5, Polonne, Khmelnytskyi region. The administrative building was put into operation in 1975. The total area of ​​the premises occupied by the court is 396 sq.m. 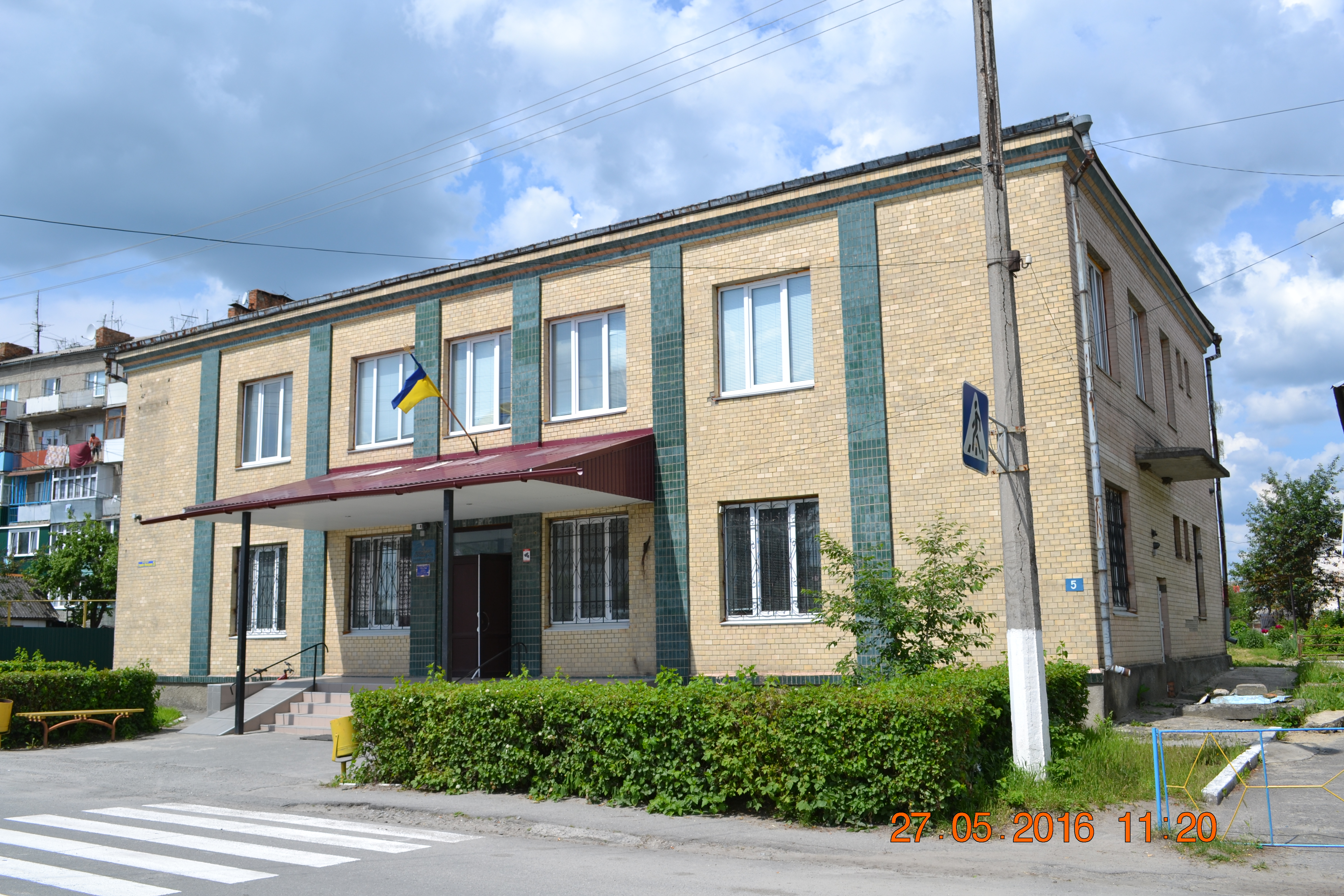 Polonne district court faithfully serves the ideals of good and justice, plays an important role in ensuring the protection of human rights and citizen.

SECTION 2. THE HISTORY OF THE FUND

The fund holds 50 cases of permanent storage, 6310 cases of prolonged storage, 20200 cases of temporary storage, 10 cases of personnel, outfits of organizational court proceedings for the period from 2009 to 2015. Changes in the composition and volume of the fund are only in the process of examination of the value of the documents. The situation is satisfactory, the cases are ordered by 2015.

The funds of the Polonne District Court of the Khmelnytskyi region postponed legislative, organizational, regulatory, planning, reporting and analytical documents reflecting the activities of the institution. Namely: orders from the main activities and personnel, reports, manuscripts, court sentences in criminal cases since 1961, decisions and decrees on civil cases since 1966, rulings on cases of administrative offenses since 1976. Documents that go beyond the chronological framework are not in court.

Reference documents of the fund are descriptions of cases, nomenclature of cases and given historical background.

The head of the court apparatus